Is age discrimination alive and well in organizations? 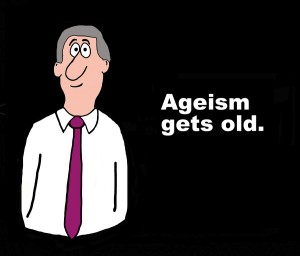 Recently, I came across an article written by Dan Lyons (author of a new book, “Disrupted: My Misadventure in the Startup Bubble“), in which he shares his personal experience with age discrimination.  Here’s a link to his article – When It Comes to Age Bias, Tech Companies Don’t Even Bother to Lie.  It’s not very long, but if you don’t want to read it for yourself, here’s a quick summary.

Lyon’s article opens with – Imagine you’re African-American and working at a 500-person technology company where everyone else is white, and one day the CEO declares in a national newspaper interview that his company’s lack of diversity isn’t an accident. In fact he prefers to hire white people because when it comes to technology white people simply make better employees. That statement would be unthinkable. But what if a tech CEO made the same comment about age?   Lyon goes on to explain that about nine months after he joined a software company called HubSpot (where the average employee age was 26; he was 52), Brian Halligan, the CEO and co-founder, explained to the New York Times that this age imbalance was not something he wanted to remedy, but in fact something he had actively cultivated.  HubSpot was “trying to build a culture specifically to attract and retain Gen Y’ers,” because, “in the tech world, gray hair and experience are really overrated”.  Ironically, no one (not the CEO, nor the media, nor company employees) saw anything wrong in this publicly-made statement.

Needless to say, this article got me thinking about age-ism, and whether there are other broad industries or even specific companies that have this age bias, without even realizing it, under the guise of encouraging innovation?  Is there an unspoken yet prevalent belief that older people can’t keep up with technology?  That they can’t learn new things?  That they’re too set in their ways to be open to new ideas and processes?  Generally speaking, more experience translates into greater efficiency, and also better decisions and outcomes.  Which would support the case for hiring older employees.  But Lyons suggests that organizations (particularly tech companies) prefer younger workers because they will work longer hours and can be paid less.

So which is it?  Is there a case to be made for building a culture specifically to attract and retain younger employees, or should companies place greater value on the knowledge and experience that often accompanies grey hair?  What have you experienced or observed when it comes to age discrimination?  Curious to hear your thoughts, please comment below.