I’ll start by saying that usually I’m an Air Canada fan. Usually. In fact, I’ve even blogged about them in the past (See Good leaders listen to customers and employees and Good leaders respond to customer feedback). But last week’s major gaffe by one of their PR staffers, a senior one no less, has me shaking my head. In case you haven’t read or heard the story, here’s a short version. 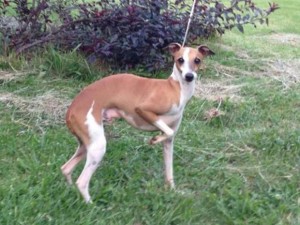 Larry, the 2-year-old Italian greyhound, was moving to Canada to join his new adopted family. Last week, while awaiting his delayed flight in San Francisco, a local staff member opened his cage to check on him, and the dog bolted. Sad as this is to an animal lover like me, this is not what has me disappointed with Air Canada. No, that came later. You see, a local CBS affiliate in California contacted Air Canada inquiring about the lost dog and received a response saying a ground team was doing its best to locate Larry. The reporter then emailed a follow-up request asking a few additional questions. Imagine her surprise when she received a response from Peter Fitzpatrick, Air Canada’s Manager of Corporate Communications: “I think I would just ignore, it is local news doing a story on a lost dog,” Fitzpatrick wrote. “Their entire government is shut down and about to default and this is how the US media spends its time.” Clearly, the email was intended for a co-worker, and Fitzpatrick accidentally hit “Reply” instead of “Forward”. Oops!

The local CBS affiliate ran the story, and quickly it went viral. It was picked up by Canadian and worldwide media, and the backlash in social media was fierce and harsh. Shortly after, Air Canada’s public relations department released a statement saying, “These comments do not reflect Air Canada’s standards or professionalism, and do not refer to the search for Larry by Air Canada employees which is ongoing. Air Canada acknowledges inappropriate comments were made in response to a reporter’s follow-up questions for additional details regarding Larry.” Later, Peter Fitzpatrick told the Toronto Star “I guess I’m the poster child now for Be Careful With Email.”

While the firestorm started with a single misplaced keystroke, unfortunately this internal attitude reflects poorly on a corporate image that already takes a heckuva lot of beating. Bashing Air Canada is a national pastime for many a Canadian! But … this situation goes much deeper. It’s not a secret that many people have a deep and enduring relationship with their pets. If your job is in “public relations”, it’s not unreasonable to expect that you would genuinely have the compassion to understand such situations and the decency to respond to it appropriately, regardless of any other factors. So the fact that an internal email went public is not so much the problem as is what was said in the email itself. When your belief is that you shouldn’t worry about negative press or image except when it might be significant, what does that tell others about your true deep-seated beliefs towards other more critical issues such as safety or your employees or your customers? And what does that say to others about your organization?

So what are the lessons for leaders from this whole sorry situation? Here are some of mine.

Oh, and by the way, as of last night, Larry still hasn’t been found.