An ageless folktale about dealing with adversity 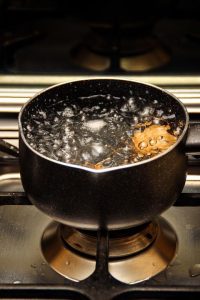 Every so often, a conversation with an elderly relative reminds me of a story from Indian folklore that I heard when I was a child.  And I was reminded once again of another story, this time on the topic of how one reacts or responds to adversity.  The story tells of a young person who was complaining to his grandmother about the challenges he was facing in his school and job – difficult assignments, tough professors, a demanding boss, not enough time to relax, and always, a seeming shortage of funds.

Her response: to place three pots of water on the stove

The grandmother responded by placing three pots of water on the stove.  When the water in each was boiling, she placed two potatoes in the first pot, two eggs in the second, and a scoop of tea leaves in the third.  About twenty minutes later, she pulled out the potatoes and eggs and placed them on a plate, and strained the water out of the tea leaves into a cup, and placed them all in front of the young man.  Puzzled, he looked up at her.

“Touch the potatoes,” she said.  “They’re soft,” he answered.

“Drink the tea.” “It’s delicious, thank you,” he responded with a smile.  “But I’m still confused, Grandmama”, he said.  “What was the point of all this?”

A metaphor about dealing with adversity

“The three pots of water were identical,” she answered.  “But the potatoes, the eggs and the tea all responded to the same situation differently.  In hot water, the potatoes softened.  If you dropped them now, they’d likely break apart into mush.  But in the same hot water, the fragile eggs hardened on the inside, and became stronger.  The tea leaves however did something completely different – they actually changed the hot water and created something brand-new and better.  So, which one are you grandson?” she continued.  “When you are faced with adversity, are you the potato, or the egg, or the tea leaves?  It is a choice that only you can make, and your choice will determine your outcome.”

As leaders, this is a question worth considering. As you already know, the unexpected always happens in the workplace, and it’s not always easy.  How do you respond to adversity?  Do you succumb?  Do you become jaded by the experience?  Or do you find a way to turn it into something positive?  As always, I would love to hear your perspectives. Please share by commenting below.

If you’d like to read another blog post I wrote a while ago about how people can either react or respond (there is a difference!) to adversity, read this one: Maintaining your composure – do you react or respond?

P.S. Since writing this, I have come to realize that there are many versions of this same story on the Internet floating out there in cyberspace.  Some authors personally take ownership for writing it, but most simply do not attribute credit at all, probably because they don’t know who the original author is.  I am in the second group.  Given that I heard this story during my childhood, many decades ago, long before the Internet was even invented (let alone this pervasive), I stick by my assertion that this is one of those stories that has been passed down from generation to generation, probably changed to fit current circumstances, but always to metaphorically illustrate an important life lesson.  Which it does, even today.