Are you an Olympic contender?

Wow, what a ride!  Thank you Canada! 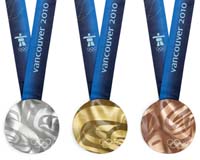 In case you’ve been hibernating in a cave somewhere, the 2010 Olympic Winter games ended a week yesterday in Vancouver, Canada.  An Olympics that began with the devastating death of a luger ended with an enthusiastic and high-spirited celebration of Canada, fueled even further, no doubt, by the gold medal men’s hockey win earlier that afternoon.  When all was said and done, Canada’s organizers and athletes not only overcame early tragedy and a whole host of other glitches, but also Mother Nature’s distinct lack of cooperation when it came to providing snow!  With determination and single-minded resolve, Canada triumphed with 26 medals, setting a record for the number of gold – 14!  The previous record for gold medals at a winter Olympics was 13, won by Norway in 2002 and the Soviet Union in 1976.  Pretty darn good for a country that at the start of the Games had never won an Olympic gold on home soil!

Okay, I’ll stop now … I think you get it – I’m a proud Canadian (who still gets goosebumps thinking about the men’s gold medal hockey game)!  But my reason for writing is more than just to wax poetic about Canada’s success at the Games.  It’s because of the great leadership lesson this offers to each of us.  In your workplace (as it did at the Olympics), stuff happens.  Sometimes, really BAD stuff happens.  There is disappointment, heartache and tragedy; but people rally with dedication, determination and motivation; through it all, it requires persistence, tenacity and effort.  Winning an Olympic medal is not easy, and neither is business or leadership success.  Both take years of perseverance, practice, and yes, often disappointment.  You can give up, retreat and take cover, or you can stand up straight, keep the ultimate goal in mind, and move forward.  When “stuff” happens, how to do you respond to adversity?  Do you surrender and resign yourself to defeat?  Or do you confront misfortune and fight your way back?  Are YOU an Olympic contender?