Are you leading from the front or from the rear? 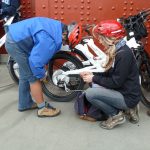 A couple of weeks ago, I bicycled across the Golden Gate Bridge in San Francisco, California. It was a unique experience, marred only by a minor mishap that occurred partway during the trip. The busy pathway was neatly divided down the middle with a line separating the lane for foot-traffic from that for wheeled-traffic, a system that was working quite well … until a young boy darted out into the bicycle lane. Not a veteran cyclist, I panicked, hit my brakes, lost my balance, and promptly tumbled over and hit my head on a concrete abutment. When I fell, those who were ahead of me had no awareness of what had just happened behind them. In fact, it wasn’t until about five minutes later when the rest of my group stopped for a photo opportunity that they realized I was missing. Indeed, the family of the young child who triggered the accident were also completely oblivious as they continued on with their morning stroll. It was the three city workers who were walking behind me who stopped and helped me stand, then sat me down and brought me water, finally getting me up and on my way once again. In the good news department, there was no major harm done, not even to my head (courtesy of my riding helmet). But unfortunately, for the next two weeks, scrapes and bruises on my knees and shins were a sore reminder of my not-so-excellent adventure.

It wasn’t till several days later (when the aches began to subside and the bruises started to fade) that I reflected back on this incident and got to thinking about what role a leader should play on the team. By its very definition, you would expect a leader to lead, to be out in front, to blaze the trail, to be the shining beacon lighting the way to your destination. But the problem with being out front is that you can easily miss what’s happening in the rear. For me, the true leaders in this situation were those who were behind me, there to pick me up and dust me off when I fell, and get me back on the road to finish my journey.

Where are you leading from – the front or the rear?  What about others around you – have they made this important distinction? Tell us what you think.