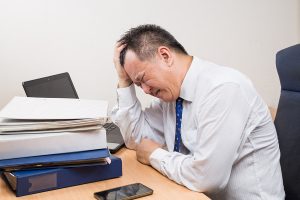 In August 2015, I wrote a column for The Globe & Mail that addressed the “bruising” workplace culture at Amazon.  Amazon’s culture was reported to be characterized by demanding hours and a gruelling pace, with no room for mistakes or missteps. Employees battered with unrelenting deadlines, constant criticism, heartless disregard for personal health and life circumstances, and zero boundaries between work and life – a system inherently designed to “burn and churn.” New recruits who can handle the relentless pressure tagged as future stars; the rest burn out and leave within a few years.  But a workplace culture with zero or little regard for work life balance isn’t unique to Amazon, or for that matter, to North America.

The Japanese even have a word for it!

Apparently this malaise crosses international boundaries … all the way to Japan.  So much so that the Japanese actually have a word for it – “karoshi”.  Karoshi means “death from overwork”, and it’s a social problem prevalent in many corporations in Japan.  A manager in a client organization recently forwarded to me an article in Risk Management Magazine titled Worked to Death.  He thought I might be interested in it.  (He was right).  The damaging and destructive workplace culture in many Japanese companies promotes overwork to the degree that employees succumb to heart attacks and brain failure, and many even resort to committing suicide.  I encourage you to quickly skim through this article, if for no other reason than the sheer magnitude of some of the numbers will stun you.  Employees working 90, 100, even more overtime hours each month; yes, that’s in addition to the regular hours in a month!

Not in North America!

But that scale of work life imbalance could never occur in North America, you might say.  Well, a professor at Sophia University in Tokyo had a very telling comment.  “In Japan, there is a name for it, a concept, and so there is a label to attach to it,” she said. “In Western countries, you will find karoshi too, but they are usually presented as isolated cases, detached from the working circumstances that might have led to a person’s death.”  Her point (if you haven’t already figured it out) is that death from overwork is not just isolated to Japan.

So is that true?  Do we have companies in North America and in Western Europe with a toxic workplace culture that operates on a “burn and churn” mentality?  Or was Amazon an isolated instance?  Perhaps more importantly, what can we do as leaders to prevent this from happening in our organizations?  Would love to hear your experiences and perspectives.  Please comment below.