If you are not a positive role model, you cannot be a leader

Today’s post is about an event that happened back in mid-April. I’ve waited this long to blog about it because I found this incident very disturbing, and it’s taken me a while to be able to write about it without feeling sick. Those of you who know me personally are aware that I love animals which is why this particular story is very distasteful. As repulsive as I find it though, my point in posting is not about the event itself, but rather about the leadership message that lies deep within. First though, let me tell you the story (which you may have already heard about through other sources).

Kristen Lindsey, a veterinarian in Austin County, Texas posted a photo of herself on Facebook proudly holding up a cat she had shot and killed with a bow and arrow along with the words,

My first bow kill lol. The only good feral tomcat is one with an arrow through it’s head. Vet of the year award…gladly accepted!

Not surprisingly, the photo went viral. A defiant Lindsey then posted on Facebook:

No I did not lose my job. Lol. Psshh. Like someone would get rid of me. I’m awesome!

Turns out she was wrong. Shortly after, she was fired from her job at the Washington Animal Clinic in Brenham when they received over 500 phone calls about the disturbing photograph. And turned out that the cat she shot wasn’t feral after all. It was a family pet, owned by an elderly neighbour, and missing for two days before this photo surfaced. 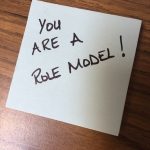 I don’t think there is any doubt in anyone’s mind as to my opinion on this story and this so-called vet. But my point in writing this post was to underscore a very important leadership principle – that you are a role model. Whether you know it, whether you want it, if you are in a position of leadership, formal or informal, people are watching you. And your behaviour and your actions set the baseline for how others behave and act.

This woman is (was) in a position of leadership. She had the title “Doctor” in front of her name, and as such, people expected a certain level of professionalism from her. Her behaviour and actions were despicable, particularly given that as a veterinarian, she has the means to humanely euthanize an animal. You may not know that before being admitted to the profession, veterinarians take an oath –

Being admitted to the profession of veterinary medicine, I solemnly swear to use my scientific knowledge and skills for the benefit of society through the protection of animal health and welfare, the prevention and relief of animal suffering, the conservation of animal resources, the promotion of public health, and the advancement of medical knowledge. I will practice my profession conscientiously, with dignity, and in keeping with the principles of veterinary medical ethics.

So it wasn’t entirely unexpected that the Texas State Board of Veterinary Medical Examiners launched an investigation into her actions. Presently, there is a petition by tens of thousands of concerned animal lovers still underway to suspend and/or revoke her veterinary license.

Not only did Lindsey breach her professional ethics, she also violated anti-cruelty laws. In the state of Texas, it is illegal to kill cats, feral or not, so authorities have also launched a criminal investigation.

Back to my point about leadership. If you are a leader, you are a role model. Whether you know it, whether you want it, people are watching you, and you have a standard of behaviour to uphold. Lindsey failed as a professional, and because she did not uphold the standards others expected of her in her position, she failed miserably as a leader.