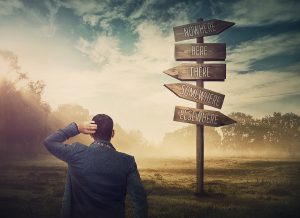 Back in October 2015, I wrote one of my regular columns for Profit Magazine on the five-step method for crystal-clear communication.  It focused on how to give directions to employees in a way that they understood and acted – the first time. But an important related subject is why employees might not understand and act in the first place.  Often, this is due to the confusion that arises from receiving a mixed message.

A mixed message is confusing!

A mixed message is a cavernous disconnect between what you say and what you do, and quite frankly, it confuses your people. And when your people are confused, your credibility drops like a rock. An example is the manager who says “Don’t be afraid to tell me when something goes wrong” but then has a minor meltdown when an employee does exactly that. The poor confused employee doesn’t know whether it’s okay to tell his supervisor when something goes wrong, or whether he should keep quiet. And the manager loses credibility in the eyes of the employee.

Mixed messages happen amongst peers as well. Have you ever met the co-worker who says “I’m open to feedback” but then gets silent and morose for the rest of the day when you offer her some advice? Does she really want feedback, or are you better off keeping your advice to yourself? Mixed messages are confusing!

Mixed messages occur because there is a disconnect between the verbal and non-verbal message, between what you say and how you behave. So here is the insight. When the verbal and non-verbal messages do not match, when the two are not synchronized, people will always believe the non-verbal over the verbal.   So if an employee or co-worker says “Everything is fine” BUT everything about his tone, facial expression, body posture, and his failure to smile is incongruent, you simply don’t believe the words. It is this disconnect between verbal and non-verbal, usually inadvertent on your part, that sends mixed messages to those around you, and sabotages your credibility and your effectiveness.

Here’s how to avoid a mixed message …

So how do you solve this? By increasing your awareness of whether your verbal and non-verbal messages are synchronized. Be conscious about what non-verbal signals you are sending. Are you making appropriate eye contact? Is your body language open? What does your tone of voice really say? What about your pace and volume? If your non-verbal message does not match your verbal message, your credibility will fall, and you will not be likely to achieve your intended outcome. However, if you are thoughtful and deliberate about delivering congruency between what you say and what others see and hear, then your credibility goes up, significantly.  And people will listen, respect and act on what you have to say.

What examples do you have of mixed messages in the workplace, incongruency between what people say and how they behave? What can you do to get past the mixed messages?  Please share your experiences by commenting below.