So you’d have to be under a rock or in a dark cave some place to have missed the firestorm that is United Airlines which ignited sometime this past Sunday night.  After all, it’s not every day that an airline literally beats up its customer!  If you haven’t seen the video that accelerated into cyberspace (where have you been?), just Google it; you should find it within seconds.  There’s a lot of conversation about the circumstances leading up to this event, but one thing is clear.  United Airlines’ CEO, Oscar Munoz didn’t handle things well, and in today’s post, I’d like to focus on his apparent (lack of) leadership.  In this age of the Internet, there is example after example of the public relations nightmare that can fall out of a poorly-managed situation (heck, I remember the Papa John’s incident five years ago!), and unfortunately, United Airlines’ handling of this situation is destined to become a textbook case of how a leader should not act.  Let me give you a quick rundown, at least as of last night.

When the videos of this regrettable event first hit the worldwide web late on Sunday night, Munoz issued a public statement on Monday, which went wrong from the very beginning.  His choice of words — “re-accommodate”, “inconvenienced” and “upsetting” — came across as tone-deaf in a situation that would have more aptly been described as terrible and horrible and shocking and distressing.

As the videos went viral, the public outcry became more intense and the flames began to blaze out of control.  That was when Munoz made his next critical misstep.  Later that day, he issued an internal memo to staff which essentially blamed the victim, accusing the man of being disruptive and belligerent.  This despite the fact that there were numerous eyewitness accounts that said otherwise.  Now if he thought that an internal memo was going to stay private, he should have given his head a shake, several times.  Needless to say, it was only a matter of hours before the “internal memo” went public; and if you thought the public was disgusted before, the revulsion-meter shot up exponentially.

Now granted, Munoz likely based this employee-missive on information provided to him by staff who were closest to the situation.  But did he really expect that the employees involved in this incident would give him a balanced perspective on what actually happened?    I suspect his intentions behind this memo were worthy; he was attempting to let his people know that he “had their back”.  After all, how many times have we seen employees who “followed procedure” left high-and-dry by management when “you know what” hit the fan?  But in this case, Munoz’s good intentions were definitely misguided; you don’t rush in to defend employees until you have a good understand of all the relevant facts.  The firestorm worsened.  Not only did public opinion deteriorate further, but the company began to see negative financial repercussions as its stock value plummeted and ticket cancellations started coming in.

Late yesterday afternoon, Munoz issued another statement, this one clearly attempting to mitigate the damage resulting from the ‘internal memo”. 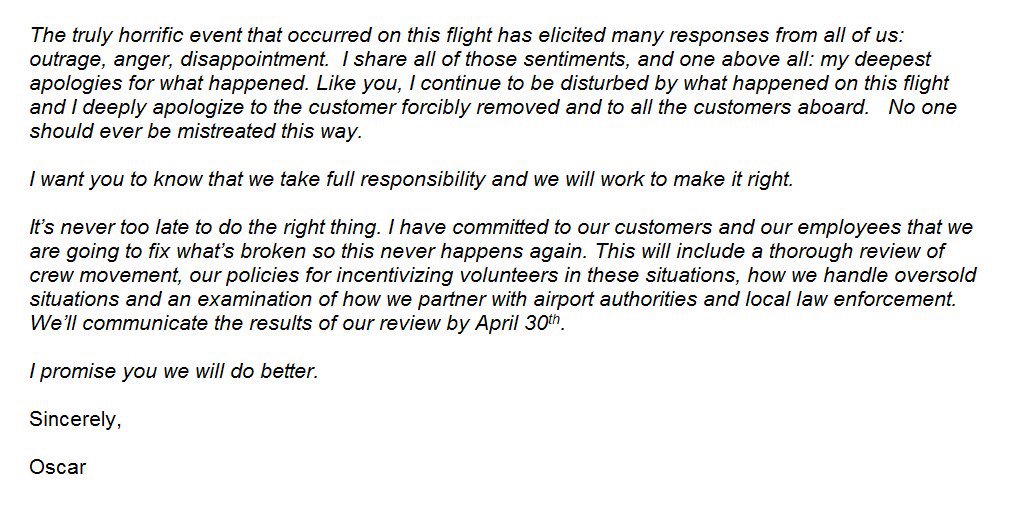 But is it too little, too late?  I don’t know.  In today’s fickle world of shifting priorities, it is entirely possible that the next news story may quickly push this situation out of sight, and thus out of mind, for most people.  The moral outrage expressed today may quickly wane in the next few days and weeks.  But it’s also possible that this particular issue may have become so large that it won’t simply sink in the veritable tide of the next world or national crisis.  Whatever the outcome, there are a few lessons here for any leader:

Well, these are the primary lessons I have, at least for now.  There is no doubt that this will continue to play out, and we’ll see what Munoz does in the days and weeks upcoming to try and control the damage that is already done.  But I’d love to hear your thoughts.  What are the other lessons here for leaders?  What specifically should a leader do, or not do, when faced with circumstances that can quickly spiral into a public relations nightmare?  Please add your comments below.

P.S. Ironically, it was only last month that Oscar Munoz was awarded the Communicator Of The Year Award by PRWeek, a top communications publication, for his work over the past year to “better engage with employees and customers.”  Not so much, apparently.