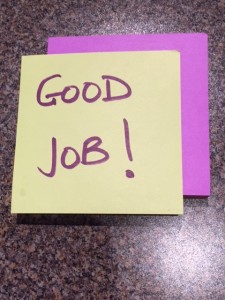 One thing I hear often from both leaders and employees is how de-motivating it can be when credit (for an innovative idea, a successful project outcome, or just a job well done) is not given fairly. Invariably, as more and more work is done collaboratively in organizations, it’s hard to assign credit to a single individual; yet so many organizations still have systems that acknowledge and reward individual effort and success. I am often asked how to overcome this apparent contradiction – is giving credit in a collaborative work environment possible without causing friction and tension? The short answer is “yes”. While certainly not easy, here is one proven idea: tie individual recognition to group performance. When you link how you recognize an individual’s performance to how well his/her team overall has done, you are less likely to cause conflict within the team over unfair credit, and more likely to promote teamwork and collaboration towards better results. I have seen this work first-hand repeatedly in client organizations, but to prove my point, let me give you a much more publicly-known example.

If you follow ice hockey, then you are probably familiar with the “plus-minus” system used by the National Hockey League (in Canada/United States). The “plus-minus” system calculates how often a player is on the ice when a goal is scored, and awards a point when the player’s team scores and subtracts one when the opposing team scores. So a single player’s performance is directly affected by the overall team’s offensive and defensive success, and over an entire season (or even an whole career), a player’s cumulative plus-minus score is an indicator of how important he is to the overall success of the team. The plus-minus score reflects individual performance, but also ties it to the team’s overall performance. And given that it’s been in use by the NHL since 1967, you know that it’s working!

[Little bit of trivia: Celebrated hockey legend Larry Robinson had an incredible plus 730 over his career, meaning that when he was playing, his team scored 730 goals more than it surrendered.]

Now you likely can’t implement a plus-minus system to use in your workplace, but the underlying premise still holds true. If you tie individual recognition to group performance, you are less likely to create tension over who’s getting credit for what, and perhaps more importantly, you’re reinforcing the importance of teamwork. What other ideas have you seen or do you use to ensure that credit is given fairly in a collaborative team environment? Please share by adding a Comment.