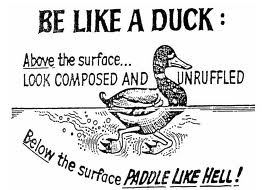 Earlier this month I spoke at the PMAC Conference in Moncton NB.  As it is with almost all my speaking engagements, it was a delightful experience – a receptive and participatory audience, helpful and cheerful staff, great networking and relevant content – overall, a meeting that was well-designed and perfectly delivered.  What most people were not aware of though was the feverish and furious activity that was going on behind the scenes.  You see … just the previous week, seven short days before the biggest and most important meeting of the year, the primary meeting planner for the conference had left this organization. So for the past week, a small team of staff had stepped in to fill the void.  Frantic and frenzied, they pulled together, figured out what needed to be done, and set out to flawlessly deliver.  Sleeves were rolled up, job descriptions went out the door, and the team pulled together to make it look easy.  No doubt there were a myriad of crises, small and large, happening from moment to moment, hour to hour, but as a team, the staff dealt with the issues and shouldered forward.  Did everything work out as perfectly as they would have liked?  Probably not.  But all in all, what I observed was a testament to great teamwork, and I extend my compliments to the staff for a job well done!

I have always believed that the true sign of a great team is their ability to make it “look easy”, despite chaos and mayhem behind closed doors.  Building a great team is your job as a leader, but the proof of your success (or lack thereof) will be seen in times of crisis.  What do you think would happen if your team were faced with such a crisis?  Would they band together and come through in the crunch, or scatter like rats on a sinking ship?   What are some of the things that you do, consciously and deliberately, to build a better team?  Please share.