I was recently reminded, first-hand, of how customer loyalty can be lost through a few ill-chosen words.  Let me explain. 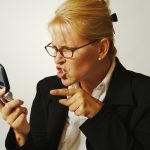 A couple of months ago, my elderly father was unexpectedly admitted into the hospital due to some health complications.  The hospital stay was longer than anyone had anticipated, and in the stress and anxiety related to this medical emergency, he missed making his payment on his ScotiaBank Visa credit card.  Now he’s been a ScotiaBank customer for at least thirty years and has a track record of not only paying all his bills on time, but also carrying a zero balance.  By the time we realized the oversight, he had been charged approximately $12 in finance charges.  As a senior with limited income, this distressed him greatly, so I promised to call the credit card company to see if they would, as a gesture of goodwill for his ongoing customer loyalty, reverse the charge.

My initial conversation with the customer service rep got nowhere.  Even though I explained why my father could not come to the telephone, the Visa rep, citing privacy laws, refused to discuss the situation with me because I was not the holder of record on the credit card.  Fair enough.  However, he suggested that I contact my father’s bank manager who would be able to assist.  So I did.

The real surprise was the conversation with the branch manager …

And promptly discovered a very surprising (and disappointing) approach to treating a long-term loyal customer.  The branch manager who returned my call first told me that they are not in the habit of reversing finance charges.  She then continued.  And no, in case you’re wondering, her next words weren’t to express regret or empathy about my father’s health setback.  No, she went on to add that hundreds of people face unexpected hospital visits, and just because someone faces an unforeseen medical situation is not an adequate excuse to not make a payment on their credit card account.  She pointed out that this missed payment was because of my father’s (or my) carelessness.  She then explained that she was willing to make an exception, but just this one time.  And just to be clear, if there was a residual finance charge (accrued in the recent days after the statement was issued), she wasn’t going to reverse that.  And finally, she made it clear that she was going to make a note on my father’s account so that such a concession was never made again.  And oh yes, this would take several days because she is very busy and has more important things to do.  (Well okay, she never actually said that she was very busy and had more important things to do, but she might as well have, because she certainly implied it).

In other words, what she really said to me was: “I’m going to help you with your problem, but first I’m going to make you feel really bad about it.”

Why not create goodwill?

So here’s my question: if your final outcome is that you’re going to help your customer in resolving a problem anyway, then why not create goodwill, why not make them feel good about the interaction?  Sure, at the end of the day, she reversed the $12 on my father’s account, which was my primary objective in calling her, but she sure didn’t make me feel positive about the process.  What a missed opportunity to create a memorable customer experience!!  Instead, her lack of empathy showed me that she clearly did not value customer loyalty; in this case, customer loyalty that has stood the test of time for at least thirty years.

So, did this branch manager miss out on a chance to build customer loyalty, or am I just being too sensitive?  I would love to hear what you think.  Please share your perspectives by commenting below.