Earlier in January this year, the subject of one of my regular columns for The Globe & Mail was titled It’s time to get rid of the performance review.  In it, I made the case for why the “performance review”, long a staple in many organizations, was an archaic practice that no longer served any useful purpose.  So when a colleague and long-time reader of the blog forwarded me a link to this recent article in Harvard Business Review, not surprisingly, it caught my attention. 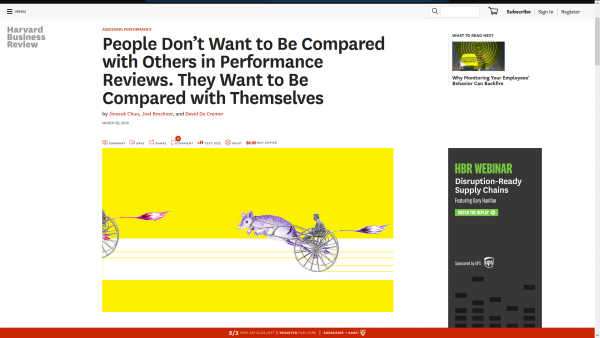 A quick summary of the article …

While you can read the entire article at the link above, here’s a Coles Notes version.  Essentially, in this paper, the authors compare two types of reference points in four studies on performance reviews containing data collected from 1,024 American and Dutch employees.

One reference point is a temporal comparison evaluation.  In this, an employee’s current performance is compared with their past performance, providing feedback on how much employees have (or have not) made progress over time.

The second is a social comparison evaluation.  Here, an employees’ performance is compared to how others have done during the same period.  So, managers evaluate how much employees have (or have not) demonstrated superiority over others.

People want to be assessed against their own progress, not against others

Employees whose performance was compared with another person’s performance (so social comparison) believed that while delivering such evaluations, their manager failed to account for specific details of their performance. Thus, they considered the evaluations to be less accurate. They thought that their evaluations were less respectful, perhaps because they felt like they were being treated like another face in the crowd.

I cannot disagree.  I have unequivocally stated that one of the primary reason performance review no longer serve any useful purpose is because in many organizations today, reviews aren’t really designed to help employees grow; they’re designed to manage promotions and raises. The conversation tends to be more about “here is why you aren’t getting a raise” and less about “here’s how you can add value to the company and your career.” In other words, they’ve become the opposite of what they were intended to be.  I still think the performance review should be replaced with weekly conversations.

I would love to hear your thoughts.  Please share your comments below.