How can you get people to change before it becomes a crisis situation?

I was talking to a friend and professional colleague from the United Kingdom the other day about what it takes to effect change in individuals and organizations.  I resorted to an oft-quoted truism to support the point I was making —

She looked up, interested, because this was not a axiom she was familiar with (guess it isn’t used as much in the U.K.!).  She continued on to tell me a story, one I had not heard before, to illustrate the same point.  Her metaphor, well-known in change management circles in the U.K., is so relevant and insightful that I wanted to share it with all of you (in case you hadn’t heard it before either). 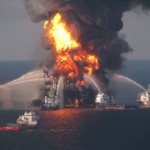 Daryl Conner is a change management consultant who recounts this “burning platform” story in his book “Managing at the Speed of Change”.  The Piper Alpha was a North Sea oil and gas drilling and production platform off the coast of Scotland operated by Occidental Petroleum.  On July 6, 1988, it was destroyed by a disastrous explosion and the resulting oil and gas fires.  More devastatingly, the catastrophe killed 167 people, including two crewmen of a rescue vessel.  One of the 61 crew members who survived was Andy Mochan, a superintendent on the rig.  Badly injured in the initial explosion, he escaped from his sleeping quarters and made it to the edge of the platform.  Behind him was a firestorm of hellish proportions as the flames spread rapidly.  Beneath him was a raging inferno where not only had surface oil ignited, but twisted metal and other floating debris could be seen among the fire and heavy smoke.   He had a choice – stay and hope to be rescued; or jump and survive for about twenty minutes before the frigid waters of the North Sea caused hypothermia to kick in, that is if he wasn’t swallowed by the flames first!  Andy made his choice — he jumped … about fifteen stories from the platform into the water.  When asked later by the news media why he took the potentially fatal leap, his answer was glaringly simply – “It was either jump or fry.”  As Daryl Conner says, Mochan chose possible death over certain death.

The challenge here for leaders is clear.  Change doesn’t come naturally to most people.  It’s far more comfortable to stay with the familiar and the known.  Yet organizational survival depends on transformation to fit a changing environment.  Ideally you want people to transform BEFORE the crisis, before the pain gets too great.  Yet, as we see again, people are reluctant to change UNTIL the crisis happens, only when the pain becomes unbearable.  What can you do as a leader to overcome this impasse?  What can you do to get them to act before the crisis is upon them?  Please share your perspective by adding to the Comments below.

I often blog about issues related to change management.  Here are a couple that might be interesting in the context of today’s post: