I survived a tsunami watch! 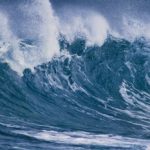 While my experience with the devastating earthquake on Friday March 11 was in no way like that of those in northern Japan, it is still a day that I will not forget.  I was in Honolulu on the Hawaiian island of Oahu, and at approximately 10 PM local time, about 2 hours after the earthquake created untold destruction in the city of Sendai in Japan, we were startled by the shrill piercing sound of tsunami warning sirens.  Today’s blog post is a tribute to the importance and value of emergency preparedness.

Surprised, we immediately turned on our television, and local broadcasters informed us that the tsunami resulting from the Japan earthquake was estimated to reach Oahu at 3:07 AM.  “Check your phone book for evacuation information,” they said.  Sure enough, a handy little map in the front of the book showed our oceanfront apartment to be in the evacuation zone.  Further information advised: if you are on the 3rd floor or higher of a concrete building, remain where you are; if not, evacuate to higher ground.  We were on the 3rd floor of our tower, so even though we stayed up for a while watching the news coverage, we eventually went to bed.  At 2:30 AM the sirens in our building were activated, and people from the 3rd, 4th, and 5th floors were asked over the public address system to evacuate to the 13th, 14th and 15th floors respectively.  A family on the 13th floor welcomed us into their apartment.  We watched the live (electronic) camera coverage on TV, and as the hours crept by, it became increasingly clear that the tsunami waves in the Hawaiian islands were not as severe as was originally feared.  Shortly before 6 AM, the all-clear was given, we returned to our apartment and went to bed.

When all was said and done, the tsunami watch in Hawaii turned out to be a non-event, at least compared to the damage and devastation in northern Japan.  True, there was flooding in the low-lying areas on some islands, but there was no loss of life and relatively little property damage.  What impressed me the most though was the level of emergency preparedness.  From the moment the first disaster sirens went off, communication was continuous and abundant.  TV and radio channels were continuously broadcasting updated reports, the phone book contained detailed information about evacuation procedures and locations, police vehicles with loudspeakers patrolled the streets in the danger zone urging people to clear out the area, and emergency service helicopters took to the air to check for any stragglers.  By 2 AM, normally bustling Ala Moana Boulevard and Kalakaua Avenue in crowded Waikiki were like streets in a ghost town.  Looking down from our lanai on the 13th floor of our apartment tower, I fully expected see tumbleweed rolling down the street! 🙂  And perhaps most importantly, probably because of the profusion of information, there was no widespread panic.

Disaster planning and preparedness is not something I usually talk about when I discuss leadership and workplace communication on my blog.  Yet, as my experience in Honolulu served to remind me, it is a critical component of good leadership.  Do you have a disaster and recovery plan for the critical components of your business? You probably back up your data regularly (you do, right?), but what if your offices were flooded, or there was an extended power outage.  Are you ready?  You may never have to face a tsunami, but do you and your people know what to do when a catastrophe occurs so that you can ride out the worst of it?  Tell me what you think?