If you are a leader, you are a role model (even if you don’t realize or want it) 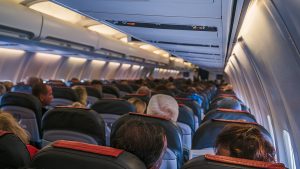 No one is flying that much any more, including me, but last month I had reason to get on a plane.  I observed a stellar example of leadership on board that I want to share with everyone.  Regular readers of the blog have heard me comment on many occasions about how leaders need to be role models.  If you can’t or are not willing to model the behaviour and actions you expect from your staff, then don’t be surprised if they don’t behave or do what you expect them to.

My flight was a short WestJet hop from Calgary to Victoria, and Mark Porter, Executive Vice-President, People and Culture was also on the flight.  You might wonder how I know this.  Because he told us.  I watched him go up to the front of the plane, introduce himself to the lead flight attendant, and ask her if he could use the public address system.  He then got on the microphone, introduced himself to all the passengers, welcomed us, told us what seat he was in, and invited us to stop by and talk to him if we wished to.  And then, after thanking the lead attendant for letting him speak, he wiped the microphone with a sanitary wipe before handing it back to her.  Later during the flight, he grabbed a couple of trash bags and did a round of picking up garbage, carefully separating the recyclables from the rest.

This leader knew that he was a role model!

As I observed Mark during this flight, I was impressed.  He was a role model.  He exhibited the behaviour and actions he expected from the flight attendants on board.  He was courteous, both with them and the passengers.  He followed health protocols.  He rolled up his sleeves and pitched in.  In other words, he didn’t expect his people to do anything that he wasn’t willing to do himself.

Now I get it.  He is after all the EVP of People and Culture, so you would expect this behaviour from someone who carries the human resources portfolio of responsibility.  But that isn’t as true that you might think it is.  In my years of consulting practice, I have seen more instances than I care to count where senior leaders expect their people to behave and act in certain ways but are not willing to walk the talk themselves.

The reality is that if you are a leader, then you are a role model.  Whether you know it, whether you want it, people are watching you, and you have a standard of behaviour to uphold. It’s critically important as a leader to walk the talk.  If you want your employees to act and behave in a certain way, then you need to model that behaviour yourself.  Bravo, Mark Porter, well done!

I’d love to hear your thoughts, please share your perspectives below.