Earlier this year, I visited China for a speaking engagement.  As a first-time visitor to Shanghai and Beijing, the juxtaposition of modern skyscrapers and ancient temples, coupled with the sheer volume of millions of inhabitants, fascinated and overwhelmed me at the same time!  Teeming masses of people, a constant military presence, and skies that never saw a ray of sunshine contrasted starkly with friendly welcoming faces, efficient subway systems and chaotic traffic that was superbly organized. 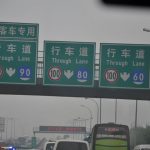 Speaking of traffic, I observed one interesting thing that Beijing city planners do to control the movement of millions of cars, motorcycles and trucks.  On their highways, each lane has different minimum and maximum speed limits.  I took this photo on the right to show you what I mean.  Those traveling between 60-100 km/hr use one lane, others going slightly faster between 80-100 km/hr use another, and a third lane is reserved for the speed demons 😀 traveling between 90-120 km/hr.  I found this intriguing not only because I’ve never seen this before, but also because it just seems so intrinsically practical!  By separating traffic out in this manner, it ensures that the slowest vehicle doesn’t set the pace for everyone else.  And it occurred to me that perhaps here was a lesson for leaders everywhere.

How many times have you been involved in situations where the slowest “vehicle” sets the pace for overall speed?  Have you ever been in a meeting where discussion on one of several topics brings the entire meeting to a grinding halt?  What about at a training course where one slow learner slows down the entire class?  Or involvement in a new initiative or project where one negative killjoy destroys momentum for the rest of the group?  Would there be value in such situations in separating out the slowest vehicles and giving them their own lane so that the shakers and movers can continue on their way?  I think so.

What do you think?