I often write about the piss-off factor – it’s when short-sighted and small-minded managers make decisions that discourage and turn off their employees and customers.  Like the time when the owner of a floor installation company lied just to avoid paying for a $200 repair.  Unfortunately, there never seems to be a shortage of examples proving that the piss-off factor is alive and well in corporate offices around the world.  And just recently, yet another example surfaced again.  Now I’ll start by saying that normally I’m an Air Canada fan.  In fact, I’m such a fan that I’ve blogged positively about them in the past (See Good leaders listen to customers and employees and Good leaders respond to customer feedback).  But in this recent situation, I think their management missed the mark, by a mile!  Let me explain. 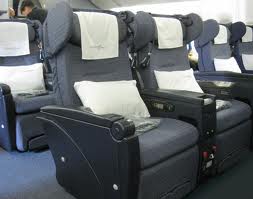 Because I am a frequent flyer, Air Canada gives me a limited number of eupgrade credits that I can use for complimentary upgrades from the economy to business class cabin.  As someone who spends much of her working life in the air, this is a perk that I appreciate greatly.  And the more (distance) I fly with Air Canada, the more credits they give me at pre-assigned thresholds.  These eupgrade credits are on a request-only space-available basis.  Which means that I can make a request, and if (and only if) there are vacant unsold seats in the front cabin, I will receive an upgrade, often at the gate just before boarding.  When you think about it, it’s a great way for Air Canada to do something nice for their most frequent flyers and build immense goodwill; and at zero incremental cost since these are seats that would have gone empty anyway.  Great idea – but then they went and made a single bone-headed move that promptly destroyed the goodwill they’d worked so hard to build!

It started with a computer error having to do with expiry dates.  When customers reach pre-assigned mileage levels, they are awarded additional eupgrade credits which always have an expiry date of February 28 of the following year.  Historically though, thresholds crossed after November 1 are awarded with an expiry date of February 28 of two years following; so instead of receiving credits that would expire in less than 4 months, the company gives you up to 16 months to use them.  Well, Air Canada made an internal decision to change that date from November 1 to December 1.  Meaning that if you crossed a threshold between November 1 and December 1, 2013, you would receive credits expiring on February 28, 2014; but if you crossed a threshold on or after December 1, 2013, your credits would expire on February 28, 2015.  All good, except that someone forgot to tell their IT department who only put this change into effect in their systems on November 5.  Which resulted in an unexpected situation.  Any flyers who crossed the threshold from November 1-4 received credits expiring 16 months later; any flyers who met the threshold from November 5-30 got credits that expired less than 4 months later.  When Air Canada caught the error, they made a decision to not make any corrections in order to not upset those who were in the November 1-4 window.  Good decision – these are frequent flyers who are loyal to the company; it makes sense to extend goodwill in situations such as this.  But what about those who fell between the November 5-30 window?  Shouldn’t Air Canada have given them the same courtesy as well, extending the validity of their credits out to February 28, 2015?  Keep in mind that in this age of social media, none of this information is private.  The bulletin boards, Twitter and Facebook caught on fire as frequent flyers discussed this disparity, none of which was complimentary to the company.  Not surprisingly, those who were in the November 5-30 period were incensed that their continued loyalty was being penalized.

I stumbled into this fray only because I crossed a mileage threshold on November 18 and was surprised (based on previous years) to get credits that were only valid for another 3-1/2 months.  After a conversation with a colleague who told me that his credits were good till February 2015 (unbeknownst to both of us, he was in the November 1-4 category), I assumed it was an error that could be easily fixed, and fired a tweet off to Air Canada.  I got a quick response – due to a technical error in early Nov, some were issued a 2015 exp, the issue has now been resolved. 2014 is the correct date.  I wrote again expressing my disappointment and asking them to extend this courtesy to all their top tier customers.  Imagine my surprise when I got a sternly-worded tweet back – we’re sorry to hear you feel that way. Your eUpgrade credits have been properly issued.

Yikes!  Let’s think this through for a moment.  We’re talking about your most frequent flyers here, the customers who repeatedly demonstrate their loyalty to your company by flying your airline.  These eupgrade credits have no incremental cost associated with them; remember, they can only be used on a space-available basis; so we’re talking about seats that were going to be vacant anyway.  C’mon guys, think big-picture, think strategically!  Why wouldn’t you extend this courtesy to those who fell within the November 5-30 period?  You could have given some of your most loyal customers a perk that would have zero short-term cost to you, but would create immeasurable goodwill in the long-term.  You could have given your customers one more reason to stay loyal to you; instead you pissed them off!

Now I realize that this situation affected me personally so I may not be the most unbiased point of view.  Nevertheless, keeping the emotion out of it, I think Air Canada lost an opportunity to show me they value me as a customer; they lost an opportunity to further solidify my loyalty to their company.  Do you agree?  Am I missing some other factor that I should take into account?  Would love to hear your perspective.