What makes the “boss from hell”? 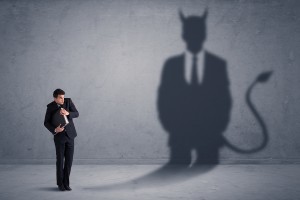 Last weekend I watched (again) the 2006 blockbuster movie The Devil Wears Prada.  If you’re not familiar with the film, this comedy drama stars Meryl Streep as Miranda Priestly, a powerful fashion magazine editor, and Anne Hathaway as Andrea Sachs, a college graduate who goes to New York City and lands the horrible job as Priestly’s co-assistant.  The “devil” in this movie is Miranda Priestly, quite possibly the ultimate “boss from hell”.  Watching the movie again was great entertainment, but it also got me thinking about what constitutes the “boss from hell”.  What characteristics or behaviours make devil bosses as horrid and dreadful as they are?  So I thought: why not start an intermittent series of blog posts on what makes up the “boss from hell”?  Here is my first one – they don’t see their employees as people.

The devil boss doesn’t see employees as people, just pawns on a giant chessboard, moved around at whim, to meet his or her personal objectives.  And if the employee happens to have preferences and choices, or wishes to have some input or conversation into the subject at hand, too bad, because their point of view is of no importance.  Now the truth is that the monster boss probably operational objectives of some sort that need to be met, and let’s face it, it can be hugely efficient to treat people like identical pawns to be played for the best eventual outcome.  But people management isn’t just about efficiency; true leadership is about achieving objectives through people, not despite people.  When you treat your people like inanimate objects in a giant chessboard, you demoralize and demotivate them.  Sure, you may win that specific game, but you’ll fail when it comes to long-term success with your staff.

P.S. By the way, this is not the first time I’ve brought this topic up; I blogged about the employee who felt like she was a pawn on someone else’s giant chessboard back in July 2013.

So this is my first trait of the boss from hell.  I’ll blog about a couple more in the next few posts.  But in the meantime, what do you think?  Thoughts about this one?  And what other traits do you think should be added to the “boss from hell” list?  Please add your comments below.