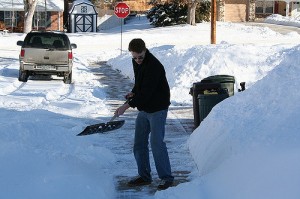 As regular readers of this blog know, I often offer up ideas to help leaders deal with and resolve the myriad of issues you deal with on a daily basis.  In fact, just a couple of weeks ago, I wrote about the frequent identity crisis of analyst versus leader.  Well, just earlier this week, one of my professional colleagues said something that brought problem-solving to the forefront of my mind again.  He said – “Eventually snow melts.  But that doesn’t mean that there isn’t value in shovelling the sidewalk.”  His point was that even though issues may resolve themselves in the long-term, that doesn’t mean that there aren’t advantages in taking action to sort them out earlier.  In the balance, “now is better than later” is a good principle for leaders to abide by as well.

Good leaders address problems and concerns sooner rather than later.  In fact, it’s been my experience that most leadership matters, left unaddressed, actually get worse.  Whether it’s analyzing a process bottleneck for the root cause, or tackling an employee performance problem, or negotiating for additional resources to handle increasing workloads, or dealing with an escalating workplace conflict, addressing the issue now, rather than later, means a better outcome.

Logically and instinctively, I believe most leaders know this.  They know that sooner is better than later, that taking action now will avoid problems later.  Yet, so many of us delay and defer.  Why?  The most common reasons I hear are lack of time, lack of the necessary skills to deal with the issue, and lack of support from senior levels in the organization.  Do you agree with these reasons?  What causes have you observed and/or experienced?  And perhaps more importantly, how do we overcome them?  Please share by adding your comment below.