Procedure manuals are worth the effort

About sixty minutes into a recent ten-hour trans-Atlantic flight, our plane encountered an unexpected mechanical problem and the pilot announced that we were going to make an emergency landing at a nearby airport.  He went to some length to reassure us that it was not a crisis situation, but more a prudent precautionary measure given that the majority of our journey was over water.  We landed safely, the problem was fixed, and within another three hours we were on our way.  End of story.  What caught my attention though was what happened earlier in the plane, immediately after the captain’s announcement.  While passengers remained calm and composed, almost three-quarters of my fellow travelers leaned forward, pulled out the emergency procedures card from the seat pocket in front of them, and proceeded to carefully read the instructions.  It was interesting to me that merely an hour ago during the safety demonstration, the flight attendants had asked them to do exactly that, and almost nobody had complied.  But now, because of a potential crisis, everyone was concentrating closely on this very same information. 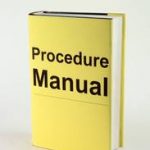 It got me thinking about the procedures manuals and check-lists that exist in the various departments in so many organizations.  Many managers and supervisors I work with advocate eliminating these documents.  They’re outdated most of the time, no one ever looks at them, it takes effort to keep them current – these are just some of the reasons I hear from those who would do away with them.  But the real worth in such documents comes during times of crisis.  It’s when things start to go wrong that people seek out the manuals and check-lists.  It’s when the unexpected happens that people turn to the security of what has been documented in writing.  All of which suggests that perhaps there IS value in job handbooks and process guides, even if it takes work to keep them current and even if they get outdated the moment they are completed.   What do you think?  Waste of time, or worthwhile effort?