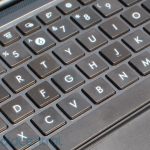 So what the heck is a QWERTYUIOP? If it looks familiar, that’s because it’s the top row on your computer keyboard.  Now you might wonder why your keyboard is arranged this way; wouldn’t it make more sense to arrange the keyboard alphabetically?  The answer to this enigma lies back in history in the 1800s.  You see, before there were computers, typewriters ruled in the office.  And when the first typewriters were developed in the mid-1800s, the keyboard was organized much more logically.  But one of the problems with the early typewriters was that the keys in the type-bar system jammed up easily.  To temporarily solve this problem, the inventors split up the keys for commonly-used letters into an illogical sequence so as to slow down how fast people could type.  By the time a better and improved mechanism that did not seize up was developed several years later, typists everywhere had already learned the unusual sequence of keys and did not want the discomfort of “unlearning” and “relearning”.  So the illogical QWERTYUIOP keyboard became the standard.

Today, QWERTYUIOP is symbolic of things in organizations that are illogical, outdated or inefficient, but that have never been challenged or changed because “that’s the way we’ve always done it.”  Think about it for a few minutes – whether it’s policies, business processes and practices, reports, meetings, task forces, or anything else – there are no doubt things happening in your organization (perhaps even in your department) that drain time, money and energy and continue to be done for no other reason than it’s too much effort to change.

What are your QWERTYUIOPs? Perhaps it’s time to take a closer look and see what needs to be changed … even if it makes you or other people exceedingly uncomfortable.  What do you think?