When you shift your perspective, you can change your reality 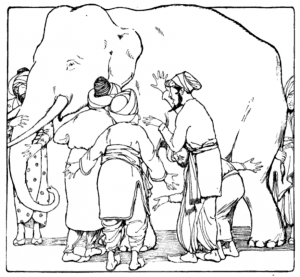 I was reminded recently of the importance of being able to shift your perspective as a leader, and a parable about six blind men and an elephant that I first heard when I was a child came to mind. This parable actually has its roots in several religions of the Indian subcontinent, but the version I remember was from when I studied Jainism.

Six blind men and an elephant

The story narrates how six blind men were asked by the king to describe an elephant. Since none of the men had ever seen an elephant, in order to respond to the king’s question they had to walk up to the animal and touch it.

The first man happened upon the elephant’s leg; so he described the elephant as a pillar.

The second felt the tail; he pronounced it to be like a rope.

The third walked up to the trunk, and said that the elephant was like a tree branch.

And finally, the blind man who reached out and touched the elephant’s tusk, described it as a solid pipe.

Upon hearing six different answers, the blind men were puzzled and turned to the king for an explanation. “All of you are right,” said the king. “Your answer depended upon your individual experience. And in fact, the elephant has all the similarities that you have described.”

The ultimate message of the parable of course is that truth can be stated in different ways. “It is only immature people that deny aspects of the truth that do not fit with their reality,” said the king. “They become deluded by the aspects they understand and then deny the aspects they do not understand.”

The ability to shift your perspective is a powerful leadership skill

A message worth keeping in mind in our roles as leaders in our organizations! Often, we are faced with colleagues, staff and superiors that have a different (and sometimes drastically opposite) perception or point of view on a situation that seems crystal clear and obvious to us. But is it possible that there are several versions of the truth? Is it possible that we are only seeing the situation from a single (and perhaps unilateral) perspective? By shifting our perspective, could we find ways to understand their point of view, and thus ultimately achieve consensus and results?

P.S. I’ve written about the importance of being able to shift your perspective before on the blog in You can’t read the label from inside the bottle.