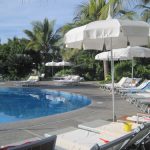 So a couple of weeks ago, over the holiday season, we spent a short holiday at the Grand Mayan, one of the mega-resorts in Nuevo Vallarta, Mexico.  Our vacation apartment was lovely and so was our stay in this area (we love Mexico!), but unfortunately, our experience with this resort was terrible.  Overcrowded facilities, overpriced services and amenities, constant nickel-and-diming, an ill-equipped kitchen, lacklustre staff response to our queries, and questionable operating practices were bad enough, but then we fell prey to the timeshare salespeople.  Aaargh, the timeshare sharks, well that experience is the subject of a future blog, but in today’s post I’m going to talk about something else.  I’m going to talk about rules – why, if you have them, you should enforce them.  And if they’re silly, then you shouldn’t have them!

Let me explain. Shortly after checking in to the Grand Mayan Nuevo Vallarta, we were given a welcome packet containing a rather comprehensive list of rules, not unusual in a facility of this type, except that this list was a little longer than we are accustomed to.

Some of the rules were reasonable.  Here was one that made a lot of sense: the palapas and the long chairs are for the use of all guests and it is not permitted to reserve them.  Any object or towel found on lawn chairs with the intention of reserving them will be removed without incurring any responsibility to the hotel.

Some of the rules were quite humorous, only because they had been translated from Spanish to English and something got lost in the translation.  This one was funny: in order to maintain the tranquility and well-being of all our guests, we implore that you avoid breaches of peace with noises, arguments, or perturbing scandals in the room, beach and pool areas. (I was thinking that perhaps front-row seats to a perturbing scandal might be quite entertaining!)

Some of the rules were ludicrous.  The most absurd one: coolers or thermal containers of any kind are forbidden in the pool and beach areas, as well as glass containers, cans or kitchen utensils.  Now I understand not permitting glassware, but this was the rental of an apartment with a kitchen; at such resorts most people bring a small cooler with them to the beach and/or pool.  We understood the motivation behind it though; it was a way for the resort to force you to use their (overpriced) services. 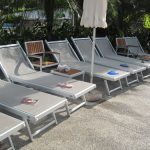 But truly, what we thought didn’t matter.  Good, bad, or just plain ol’ funny, the rules were the rules and since we were staying at this resort, we resolved to abide by them.  Turns out though that we were the only ones!  It didn’t really make any difference as to how stupid or sensible the rules were since no one actually followed them, and during our week there, they were NEVER enforced.  Palapas and chairs were reserved unabashedly – you couldn’t find an empty one at 8 AM in the morning, and most of them stayed without people till at least 11 AM or noon.  While we didn’t come across any perturbing scandals :), large families with teenagers and young children meant a lot of screaming and other excessive noise in the pool and beach areas.  As for the “no coolers” rule, there was about a ½-hour one afternoon when I thought we were the ONLY people at the beach who DID NOT have a cooler or other thermal container.

So why am I blogging about this?  Well, clearly the management of this resort put a lot of thought into developing this wide-ranging and thorough list of rules.  But if you aren’t going to enforce them, what’s the point?  Perhaps more importantly, what does this say about your leadership and communication skills?  I suspect that management didn’t enforce the rules because some of the more absurd ones would have met with backlash from resort guests.  But other regulations were clearly valid, and everyone would have benefited if they were put into effect.  Too many rules meant that the resort had to fall to the lowest common denominator: nothing.

So … what do you think?  Do you have any silly rules in your department or organization?  Are you able to enforce them?  Does it affect how you can enforce the sensible rules?