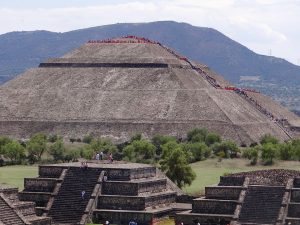 Thirteen years ago (long before this blog even came into existence), I wrote a Mega Minute titled Learn From the Aztecs in which I outlined the “cumulative experience” approach taken by these ancient people in building their glorious city of Teotihuacan.  The original settlement of this ancient metropolis, located near present-day Mexico City, began in 200 B.C.  At its peak in 600 A.D., it was home to approximately 200,000 people, making it one of the old world’s largest cities, with an urban core covering some twenty square kilometers.  However, about 650 A.D., for reasons unknown, the city was abandoned.

When the Aztecs arrived, it was already a ruin

By the time the Aztecs arrived on the scene in 13th century, the area was already a little more than an ancient ruin.  The Aztecs wished to construct Teotihuacan, their Place of Gods, and rather than destroying what was already there and starting from scratch, they took the existing structures and used them as foundations upon which to build even greater temples and palaces.  The Aztecs knew that they could achieve more by building upon what was already there, rather than starting from the beginning.  The advantage of cumulative experience was that it not only shortened the timeline, but also allowed the new construction to be bigger and better than the old.

Is there a message for leaders?

As leaders, it’s worth considering how cumulative experience can be an advantage in our workplaces as well.  There is a tendency for leaders, particularly those new to their roles, to champion new initiatives that often involve beginning at square one.  In fact “start with clean slate” is frequently hyped as a superior approach.  But there is often great benefit to be obtained by taking what is already there, perfect or not, and building upon it.  Past experiences, positive or negative, make a solid foundation upon which to construct something even more magnificent.  When you seek out the reliable groundwork that was done previously, not only do you have a solid base on which to erect further, but you also honour and respect the effort of those who came before.

Well, do you agree?  Is cumulative experience an advantage, or can it become a millstone around your next?  What have been your experiences?  I would love to hear your perspectives.