The horrible boss takes credit for your work 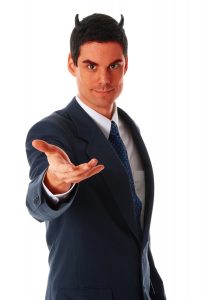 A few weeks ago, I started a short series of blog posts about the traits that characterize “the boss from hell” – you know, the horrible boss who you dislike working for so intensely that you’d do just about anything not to come into work.  Previously, I blogged about how the horrible boss not only treats employees like they’re not people, but also overworks them, and constantly criticizes them.  This short series got so much attention (apparently a lot of you either work for, or previously worked with a horrible boss!) that I figured I’d continue the series, based partly on some of your comments in the emails I received on this subject.  Today’s common characteristic of the boss from hell? – they take credit for your work.

The horrible boss takes credit for your work

Bosses from hell take their employees’ work and pass it off as their own.  Now it’s true that as a manager, you can rightly take credit for the work that comes out of your department.  But it’s when you take credit for the accomplishments AND do not acknowledge the specific people who actually did the work that you cross over the line into the “horrible boss” category.  Terrible bosses think that taking credit for the good work that comes out of their department elevates them in the eyes of others.  Not so.  In fact, just the opposite.  It proves them to be lousy leaders.  Ironically, when you recognize your specific employees for their talents and achievements, you actually further validate yourself to be an exceptional leader.  But horrible bosses don’t understand that!

Even worse, terrible bosses are known to point fingers at others pretty quickly if the opposite happens.  They have no qualms about throwing their staff under the bus if their work is substandard.  Their philosophy is – good stuff, I did it; bad stuff – name names.  Bottom line: when it comes to horrible bosses, the only true motivation is themselves.

I’ve got a couple more traits of horrible bosses to share in upcoming blog posts, but c’mon, tell me yours.  Let’s keep this conversation going.  Add your comment below.