To motivate employees, say thank you 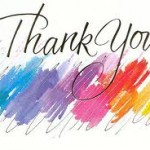 Ground-breaking research on employee motivation conducted by Dr. Elton Mayo in the 1930’s gave rise to the Hawthorne Effect.  In essence, the Hawthorne Effect describes a fundamental concept that may seem obvious to us today: that workplaces are social environments and people thrive in positive and respectful surroundings.

So, as a leader, when you create a positive atmosphere at work, you are much more likely to secure your employees’ cooperation and loyalty, and thus improve productivity and performance. Which begs the question – what specific things are you doing to create such an environment, and motivate and encourage your employees to peak performance?  Well today I want to start an occasional series of posts that focuses on zero-cost or inexpensive ways to do just that.  I’ve got one idea for you today, one later this week, and every so often over the next few months, I’ll add to our ongoing list.  And as we go along, please feel free to add to the list!

So I’ll kick off this series with quite possibly the most (glaringly) obvious one — say thank you!  It’s what our mothers taught us years ago, and it’s as golden now as it was back then.  Now the important word here is “say”, as in verbalize it, put it into words, don’t just think it, say it.  And say it to the employee, not to others!  When you take the time to say “thank you”, you do two things – first, because it’s the courteous thing to do, you create a respectful workplace.  And second, you set an example for others.  If you’re in a position of leadership, then you’re also a role model (whether you know it, like it, or want it … or not!), and when you make it a point to say “thank you”, you establish the accepted behaviour norms on your team.

So … your thoughts — either about saying thank you, or about what else you do to create a positive and motivated workforce.  I’ll be back again later this week, but let’s get this conversation started now.