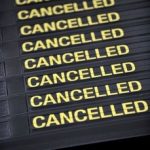 Aah … the adventures of world travel!  Last week was an “interesting” week for me on the travel front! I was speaking at a client event in the UK from Monday to Wednesday and was scheduled to return to Canada on Thursday.  I awoke Thursday morning to a series of email notes advising me that my flight from London to Calgary was delayed and potentially cancelled due to “volcanic activity”.  After I confirmed that this wasn’t a typo (after all, volcanic activity is not what one expects to encounter in London!), I rapidly started considering alternatives.  Unfortunately, there weren’t many – it was expected that within hours, all north and west European airspace would be closed – so I moved towards trying to secure accommodation for the next few days.  I had pretty much resigned myself to the fact that I was going to be stranded in London for at least a couple of days (I had no inkling at that point that a couple of days was a gross underestimation given how extensive and far-reaching this issue has become), but unbeknownst to me, the airline travel gods were smiling down upon me, and I was destined to become one VERY lucky girl.  I got out of London by the skin of my teeth!  I was on the THIRD-LAST plane to depart London before Heathrow airport shut down at noon that day.  Yup, the very airport that shut down on Thursday at noon AND has not reopened since!  I say lucky, but the truth is that luck was only a small fraction of my ultimate success.  In fact, it was incredible effort and hard work of over half-a-dozen individuals that got me out of London on Thursday and back on the North American continent almost 18 hours later!  Here’s my story.

My originally scheduled flight was London-Calgary departing at 1:15 PM on Thursday April 15. Since the noon shutdown on Heathrow had already been announced, that flight was of course cancelled. The Air Canada staff in London were extremely helpful. Donna from their concierge office told me that if I could get to the airport by 10:15 AM before the international check-in deadline, she would find a way to put me on the flight to Vancouver. “It wasn’t Calgary, but at least it was on the same continent, did I want it?”  Heck, yeah!  Great news, except that it was already 9:40 AM!  Could I do it?  I was determined to, but I would need a lot of help!  I have never dressed, packed, ordered a car and checked out of a hotel so fast in my life!  The staff at the hotel were ready to lend a hand.  By the time I got to the front desk, a car was waiting and they were prepared to get me on my way.  My fantastic (and lead-footed) driver Hassan took my problem on as his own, and somehow managed to get me to the airport by 10:10 AM.  Donna had my boarding pass ready, and one of her colleagues Ida whisked me through FastTrack security and then cheered me on as we raced down several concourses to my gate.  About 15 minutes later I was cleared into the final waiting area.  Time to stop for a few mintues and finally catch my breath!  Since I no longer had a data connection and so could not get online, Suzie from Air Canada promised that she would email my husband letting him know about my change in travel plans.  This was a completely full flight, and the crew was doing its best to get out before the noon deadline.  I was one of the first to board and I sat down and tried to bring my heart rate down back to normal.  At 11:27 AM, the captain announced that if people were not in their seats with belts on and cabin baggage put away in the next 3 minutes, the flight would be cancelled as he would not be able to get clearance to take off. There were still a few people on the jetway, and several still lined up through the front cabin. Talk about passenger cooperation! Somehow, the door was closed and (almost) everyone seated by 11:30!!!  At 11:45 the plane pushed back, and we waited for our turn to takeoff.  Those last few minutes were agonizing.  If we didn’t take off by noon, would the flight be cancelled and would we have to return to the gate?  When we finally took off at 12:05 PM, there was a collective sigh of relief in the cabin.  I looked out the window, and there were only two planes behind us waiting to take off – a Virgin Atlantic and a Cathay Pacific. Yes folks, we were the THIRD-LAST plane to depart before Heathrow shut down.

I said earlier that I was a very lucky girl, but in truth, it wasn’t luck, but the combined efforts of several people that make it possible for me to write this blog today sitting at my desk in my office in Calgary instead of a hotel room in London.  Donna, Ida and Suzie from Air Canada’s Heathrow Operations, staff at the Beaumont House hotel in Windsor UK, Hassan from Windsor Cars, even all the passengers on the plane that somehow got to their seats by the 11:30 AM deadline – it was the collective efforts of all these people that led to my ultimate success.

This whole experience reminded me of what characterizes a leader.  Leaders are not defined by their own existence, but by the actions and efforts of the people around them.  If you are not surrounded by people who translate your goals and vision into reality, then you have nothing to show at the end of the day, and you are nobody in the eyes of your organization.  My goal on Thursday was to depart from the UK and return to Canada as soon as possible, but it was a myriad of other people who took action that allowed me to turn my objective into reality.  Have you thanked the people around you who make this possible in your world? This was a reminder for me, and I certainly plan to do so.