What can goldfish teach us about creating a positive working environment? 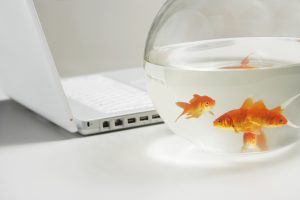 Did you know that goldfish only grow to the size of their enclosure?

Which is ironic, given that goldfish are actually indeterminate growers, which means that unlike humans, they have the ability to grow until they die.  In fact, depending on the breed, goldfish can grow to a maximum of 4 to18 inches!  But most of them don’t.  They don’t because they are restricted, both by tank size, and the poor quality of their water.  Small aquariums and fishbowls usually have little or no filtration, and often infrequent water changes; as a result, the water quality is typically poor, and the goldfish’s growth is stunted.  So they remain, underdeveloped and constricted, held back from reaching their full potential.

The leader sets the tone

Which takes me to the leader’s role in the workplace.  A good leader not only creates a broad ecosystem for employees, but also ensures a favourable positive working environment.  That means the workplace needs to be, at least metaphorically speaking, a sprawling area in which people have the freedom to think and act without negative repercussions, coupled with frequent deliberate infusions of fresh creativity, and the opportunity to “filter” ideas and planned actions past other colleagues.

Translated into reality, that means a positive working atmosphere, characterized by an open-minded willingness to challenge the status quo, listen to alternative viewpoints, and go down paths less-traveled.  And all of this has to come from the top.  It is the leader who sets the tone for how people work and interact with one another.  It is the leader who has to be a role model for how others are expected to behave and act.

Not many leaders will disagree with my depiction above.  Yet, why is it that so many workplaces resemble the small goldfish bowl rather than a giant well-filtered aquarium?  What makes so many managers create working environments that hold employees (and organizations) back from achieving great things?  Would love to hear your thoughts as to why this happens.  Please add your comments below.