What do your actions say about your character?

“You can easily judge the character of a man by how he treats those who can do nothing for him.” 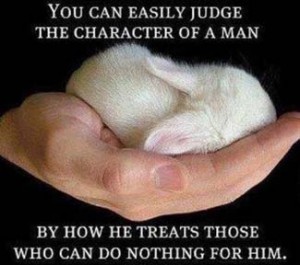 A client forwarded this quote and photo to me recently and not only do I agree wholeheartedly, but it reminded me of a blog I posted over two years ago titled How do you behave when others are not watching? In it, Mary Bale, a bank worker in Coventry UK, was cruel to a helpless cat and the incriminating behaviour was caught on video tape. This quote by von Goethe is saying almost the same thing. The true measure of one’s character is how you behave when those around you have less power than you. I have seen far too many people in the workplace who behave one way (better) in front of their superiors and conduct themselves differently (poorly) in front of their peers and subordinates. I’ve said it before and I’ll say it again: these people are not leaders. Good leaders treat ALL people with respect and professionalism, no matter what their relative status in the organization.

What have you seen, good or bad, that echoes this principle? Please share.