The power of focus 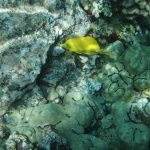 One of my favourite ocean activities is to snorkel. And I’ve been doing it for many years with great enjoyment. But on a recent trip to Hawai’i, a park ranger gave me some advice I’d never heard before. He said, “When you snorkel, don’t swim around trying to find the biggest and most colourful fish and ocean-life. Instead, decide on one square yard of the ocean bottom, and then watch that section for at least five minutes. You’ll see more in those five minutes than you’ll see in one hour of swimming around. Intrigued, I tried it. Sure enough, when I started to concentrate on just one small section of ocean floor, I began to see things I had never noticed before. Tiny, semi-transparent jellyfish hovering over a clump of tube coral; miniature hermit crabs who’d taken up residence in snail shells, nearly invisible were it not for their antennae waving in the water; little, electric-blue wrasses darting through the algae; bold needlefish swimming quickly between the waving fronds of branch coral; sea cucumbers almost buried in the sand, their presence only known by the almost-imperceptible movement of their tentacles; and a whole lot more! By focusing on one defined area, I suddenly discovered aspects of underwater ocean life that I never even knew existed.

In the everyday challenges of the workplace, it’s far too simple to get distracted by a plethora of ongoing initiatives and unexpected crises. It’s very easy to chase the big and colourful fish! Yet, what would happen if you were to stop and focus on just one specific issue or subject for a short period of time? Would you start noticing some of the small details that might have escaped you in the past? Could you get insights, could you uncover perspectives that you had never considered before? I think it might be worth doing – the power of focus could help you find unexpected and favourable outcomes.

What do you think?