When facing difficult situations as a leader, think about the physics of flying a kite 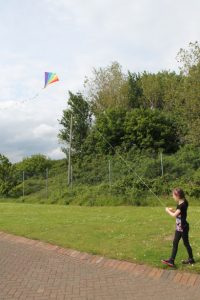 I’ve previously blogged about how airplanes take off against the wind.  It seems counterintuitive … you would expect that it would be easier if the wind were coming from behind the aircraft, giving it a push. Yet in reality, it is easier for a pilot to take off when flying towards a full-force gale, rather than with it.  Well, turns out that the physics of flying a kite is actually similar to that of flying an airplane.

The science behind the flight of kites is not only interesting, but also offers a powerful lesson in leadership and an alternate perspective on dealing with the numerous difficult situations in which you face resistance, opposition, setbacks and delays in the things you are trying to accomplish.  There are four forces that counteract each other in order for flight to occur.  Lift and weight act vertically, and drag and thrust act horizontally.

As wind moves over the body of the kite, speed differences means that the air pressure above the kite is less than the pressure below, and as a result an upward force is created called lift.  At the same time, the downward gravitational force of weight pulls the kite towards the earth.  Thrust is the forward force that propels the kite in the direction of motion.  While an airplane generates thrust with its engines, a kite must rely on wind or failing that, running by the kite flyer.  Drag is the backward force that occurs due to the friction of the air movement.

What does it take to stay in the air?

Flying a kite offers a great metaphor for leadership and the difficult situations you likely face on a weekly, if not daily, basis.  In order to get a new initiative off the ground, there always has to be some sort of impetus or energy that overcomes the status quo – the force of the lift has to be greater than the force of the weight.  And then, to keep the project airborne, there have to be four forces, two counteracting the other two.

Think about it, if all you had were positive forces, then the kite would not stay aloft.  So to carry the metaphor further, success in any leadership initiative comes from the counterbalance of positive forces and negative forces.  This analogy is worth considering the next time you face resistance, opposition, setbacks and delays in your role as a leader.  Perhaps it is these very negative forces that counterbalance the positive ones and keep your initiative in flight and moving upward.

P.S. If you’ve ever heard the phrase “A kite always rises against the wind, not with it”, it should now make perfect sense.

Well, what do you think?  Do you see how the difficult situations you face as a leader actually contribute to keeping all the balls that you juggle on a daily basis in the air?  I’d love to hear what you think.  Please share your thoughts by adding a comment below.