Why flying is better than driving 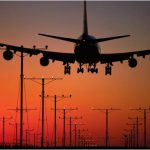 On a recent flight from Montreal to Toronto, I struck up a conversation with the off-duty pilot sitting next to me, who regaled me with interesting tidbits of trivia about flying and airplanes.  Did you know that when planes taxi on the runway, they usually roll along the tarmac at about 25 miles per hour (that’s about 35 km per hour for those of you metrically inclined)?  Yet there is absolutely NO way that a plane could take off at that speed.  In order to take off, most large jets have to leave the ground at a minimum of about 180 miles per hour (290 kph), and then in order to stay aloft, have to cruise at about 600 miles per hour (960 kph).  In other words, if you want to take off and fly, you must increase your speed up to a significant level before you’ll ever get off the ground, and then accelerate even further if you want to stay up high.

As I continued to converse with my new-found friend, it occurred to me that there were parallels to be drawn between what he was describing and the launch of new initiatives in the workplace.  When there is a new project in the works, conventional wisdom suggests that starting slowly and conservatively may be the best way to go.  “That way,” its supporters rationalize, “you’ll be able to gain experience and work out the kinks along the way.”  But my experience has been just the opposite.  When it comes to launching a new program, taking measured carefully-considered steps is in fact the kiss of death.  If you travel slowly along the runway, you will move forward, but you will NEVER get off the ground.  If your goal is to drive the plane from Montreal to Toronto, then 25 mph may eventually get you there.  But if you want to fly the distance, then you have to build up speed and generate momentum to take off, and then accelerate even more to stay high in the sky.  So … if you have a new initiative underway in the workplace, remember … establish your destination, put your flight plan in place, and then fly, don’t roll, to your destination.