A couple of weeks ago, I offered up two ideas, based on my experience in my leadership development practice, about why negativity is so widespread in some organizations.  It struck a chord with a few readers because I received several private emails, all asking for advice on HOW to deal with this negativity.  I’ve already offered some perspectives and strategies to the folks who emailed, but it occurred to me that others may also benefit from this information.  So I’ll make it point to offer specific tips on this subject every so often in the upcoming months.  To get us started, here is one specific action that you can take if you are the supervisor or manager of a team that has one or more negative people. 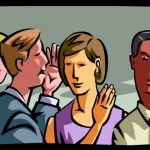 Feed the grapevine. Okay, that sounds a little cryptic, so let me explain.  Every organization, even if it’s small, has a rumour mill, or a grapevine.  And honestly, I figure that the company grapevine is quite possibly, THE MOST efficient and well-oiled form of communication known to mankind!  The crazy thing is that so many of the supervisors and team leaders that I work with are so frustrated with the company grapevine that they do everything within their power to squelch it or shut it down.  But the truth is that you can’t!  Instead, I subscribe to a different philosophy.  I believe that if you can’t beat ‘em, you should join ’em.  Instead of fighting AGAINST the company grapevine, you will have much greater success if you work WITH it.  Feed it with information!  When people have scarcity of information, they make it up!  And invariably, the stuff they make up are the worst possible scenarios.  And then, fueled by the most horrible possibilities, the rumour mill goes rampant and out of control.  Instead, if you provide as much information as you can (obviously without violating any confidentiality requirements), you will at least counteract, if not overcome the negative gossip that normally exists there.  The key is that you have to be willing to provide information, even if it’s not finalized or complete.  A lot of people prefer to wait until all the i’s are dotted and all the t’s are crossed before they share information, and it’s this very delay that get the negativity spinning and churning.  Feed the grapevine – communicate more, much more, much more often!

Have you observed any examples of this negativity churn in your organization’s grapevine?