Overworking your employees? You’re the boss from hell! 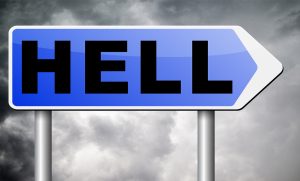 Earlier this week I started a series about the characteristics of the boss from hell, prompted by my recent re-watch of the movie The Devil Wears Prada.  My last post was about how devil bosses don’t see their employees as real people (with hopes, preferences and dreams), but rather as pawns to be moved around on a giant chessboard to achieve some greater objective.  Here’s another trait of the boss from hell – they overwork their employees.  The boss from hell doesn’t understand that overworking his/her people is completely counterproductive, as nothing burns employees out more than overloading them.  In the movie, not only did Miranda Priestly (Meryl Streep) overburden Andrea Sachs (Anne Hathaway) with more work than any normal person could be expected to handle in a single day, but she also expected her to be at her beck and call 24 hours a day, 7 days a week!

Unlike in the movie, overworking of employees can often happen unintentionally; after all, if you’re in a position of leadership, the tendency is to get the most you can out of your best people.  But the irony is that when you go overboard, you’re actually setting both them and yourself up for failure.  Numerous studies repeatedly show that employees who work more than 50 hours a week have substantial diminished productivity, and once you get past 55 hours a week, productivity drops to the point where you’re getting absolutely nothing of value any more.  So not only are you NOT getting a sustained positive outcome, but you’re likely also driving your best people out the door.  When you overwork good employees, you’re making them feel like they’re being penalized for great performance.  It is true that talented employees will willingly take on a greater workload than others, but if they feel like they’re being choked by the effort then, sooner or later, they’re going to walk …. right over to another organization and leader, one that doesn’t overwork them.

So this is my second trait of the boss from hell.  I’ve got one more to share with you next week, but as always, curious to hear your thoughts.  What do you think?  And do you have any other traits that you think should be added to the “boss from hell” list?  Please add your comments below.