What will it take for a rattlesnake to bite itself? 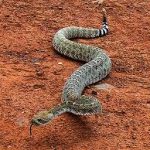 In his landmark book Rattlesnakes: Their Habits, Life Histories, and Influence on Mankind, respected herpetologist Laurence Klauber describes what happens when a rattlesnake is prevented from escaping out of the hot sun. A rattlesnake is exothermic which means that it normally controls its body temperature simply by moving into a cooler area. But if it is unable to do so, its body overheats and within a matter of minutes, death results. As the temperature rises, the rattlesnake gets more and more agitated, trying everything it can to get away, including biting itself in the final minutes of its violent efforts to escape the torment. Essentially, in desperation, the rattlesnake contributes towards its own ultimate demise.

“People perform better under pressure,” is a refrain I often hear when talking to managers and supervisors when they are justifying the fast-paced and stress-filled nature of their organizations and departments . And that is true in many situations, but there is a fine line between pressure that produces enhanced performance and that which discourages and causes surrender and defeat. Much like the rattlesnake, when people are put in situations in which they are prevented from making decisions, taking action, or controlling their working environment, they simply give up and in many cases sabotage themselves (and your department or organization) before they throw in the towel and at least metaphorically, die. So … are you inadvertently creating a working environment where your employees feel like they do not have any control over their decisions or actions? Worth pondering if you’re a supervisor or manager, isn’t it?

So what do you think? Have you seen situations where employees commit career or professional suicide simply because they see no way out? Please join the conversation by adding your Comment below.