What long-nosed bats can teach us about teamwork

I often blog about what the animal kingdom can teach us about teamwork – Canada geese, meerkats, crabs, ants and penguins have all come up in the past. So regular readers of the blog will not be surprised by today’s post about long-nosed bats. 🙂 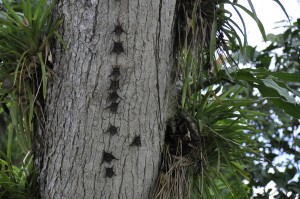 Long-nosed bats, endemic to Central America, have a unique approach to discouraging predators. They feed primarily at night, so during the day they roost in a number of places, one of which is the surface of tree trunks. However, most trees are usually out in the open, so in daylight, the little bats can become very tempting morsels to predatory birds. Enter teamwork. Before settling down for the day’s nap, groups of eight to sixteen bats arrange themselves in a roughly vertical line, to take on the appearance of a long snake. When a hungry bird approaches hoping for a delicious delicacy, the bats’ defence mechanism is to individually move back and forth within the vertical formation to create the combined effect of a large snake about to strike. The cautious bird, vigilant of poisonous snake venom, flies off to find easier prey. Brilliant!

So what are the lessons here for leaders about teamwork? I see at least three.

Do you see other lessons? What else can we learn about teamwork from long-nosed bats? Please add your comments below.