Need to inspire and re-ignite your team? Harness the Diderot effect

What is the Diderot Effect?  Simply put, a social phenomenon in which, when a consumer obtains a new possession, it creates a spiral of consumption that leads to the acquisition of even more possessions.  These examples may sound familiar.  You buy a new piece of clothing, and immediately you start looking for new shoes, a new belt, or other accessories.  Or when you replace the carpet in your living room, suddenly the window coverings seem dated and tired, so you need to replace those as well.  Or you finally purchase a new car.  But now you need premium gasoline, and new floor mats (the ones from the old vehicle will no longer do), and other assorted car-related paraphernalia.  This is the Diderot Effect. 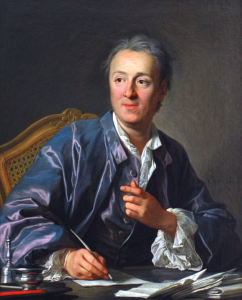 “Regrets on Parting With My Old Dressing Gown”

The effect was first described in an essay “Regrets on Parting With My Old Dressing Gown” written by the French philosopher Denis Diderot in 1769.  In it, he describes how he received a gift of a beautiful scarlet dressing gown which while he was initially pleased with, led to unexpected results, eventually putting him into debt.  Once he had a fashionable new dressing gown, the rest of his possessions seemed cheap, so he started making purchases to live up to the new level of elegance and style.  He replaced his old straw chair, for example, with an armchair covered in Moroccan leather; his old desk was replaced with an expensive new writing table; his formerly beloved prints were replaced with more costly prints, and so on.   He writes in his essay” “I was absolute master of my old dressing gown but I have become a slave to my new one.”

As you might gather, the Diderot Effect is usually cited as a bad thing, often in the context of excess consumerism.  But there is a variation of the Diderot Effect that applies to the workplace that is actually beneficial.  It has to do with how peer pressure can be used to raise standards.  Let me explain.

Let’s say you bring a bright young employee on to your team.  She has new ideas and is likely tech-savvy.  As a result, she offers up advice and makes some positive changes in department processes.  Or one of your existing employees attends a three-day training course.  He is so excited with what he learned that he comes back to the department with specific suggestions on how to do things more efficiently and effectively.   In both situations, the Diderot effect suggests that these two new “purchases” would lead to even more purchases.  In other words, it would force the rest of the team to raise their standards, to “up their game” so to speak.

That is a good thing.  In this scenario, the Diderot Effect is actually a great way to inspire and re-ignite a team that is beginning to stagnate and falter.  The reality is that as long as things don’t change, the status quo continues to be acceptable.  But when we drive change, it raises the bar and in fact elevates the overall standard.

Well, what are your thoughts?  The Diderot Effect in the workplace – burden or boon?  Please comment below.