The terrible boss criticizes in front of others 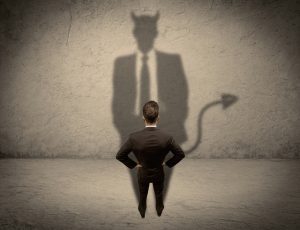 Last week I blogged about one of the common traits of terrible bosses – that they are micro-managers.  Today, ending our short series on this subject, I want to cover one more widespread characteristic of the terrible boss – s/he tells you off in front of others.

There is only one thing more disheartening than being criticized by someone in authority, and that is being criticized in front of an audience, particularly when that audience is the people you work with.  But this is something that terrible bosses do regularly.  You see, from their perspective, it is a way to control by fear, and quite frankly, they do it often because it is effective.  If they can control you and get you to do what they want, AND build up their already low self-esteem in the process, why shouldn’t they?

Sadly though, even though it may work in the short-term, they aren’t building relationships for the long-term.  What that means is that when the power shifts (which if often does at some point in the future), then these horrible bosses have no goodwill to fall back on.  They’re on their own.  But even though karma says that they will eventually get what is coming to them, right now, if you happen to be at the receiving end, you’re stuck with their inappropriate and demoralizing behaviour.  A lousy place to be!

This is my last blog post on this subject (at least for now), so I would love to hear what I’ve missed.  So far, I’ve covered six common characteristics of the terrible boss (also referred to as the “devil boss” and the “boss from hell”).  In addition to criticizing in public, here are the other five: