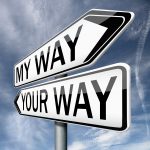 Collaborative problem-solving is a great way to arrive at better solutions, so I always encourage team members to work on issues in small groups rather than individually.  In the past, I have offered up problem-solving tools on the blog (How many hats? and The early bird gets the worm but the second mouse gets the cheese).  But in today’s post, I want to focus on what happens if you find yourself with staff members who clearly fall into opposing sides on a single issue.  In such a situation, is a collaborative solution impossible?  Not necessarily.  I utilize a problem-solving tool known as constructive controversy.

Constructive controversy forces team members to look at the situation in terms of both the pros and the cons.  Here’s how it works.  Randomly put your staff into two groups and assign each team one extreme of the polarizing situation.  To ensure clarity, put statements up on a flipchart or whiteboard so that each team is clear on which extreme they are representing.  Each team then needs to brainstorm the issue and cooperatively develop their “best reasoned judgement” that supports their assigned position.  Encourage the teams to challenge each other (within their own group) as they develop the case for their assigned point of view.  Give them a specific amount of time, with the expected deliverable as a bulleted list.  Once their time is up, have each team do it all over again, for the same amount of time, but now for the other extreme of the polarizing issue.  Again, their task is to brainstorm, discuss and develop their “best reasoned judgement” in the form of a bulleted list, but obviously this time for the opposing point of view.  By asking your people to generate arguments for one extreme, and then forcing them to argue against it by going to the other extreme, you can take your team to the final step of this problem-solving tool, which is to synthesize what they’ve learned into a position that both sides can most likely agree.

My experience with this problem-solving tool has been very positive.  By insisting that individuals argue both in favour of and against their initial point of view, I have found that a joint collaborative solution is naturally achieved.  Plus, an added bonus is that your team members learn constructive conflict resolution skills.

So now it’s your turn to share. What are some of the specific approaches you have taken on your teams to come to agreement on polarizing issues?  What problem-solving methods are you using?  Let’s discuss.