Trying to motivate your employees? Could you be inadvertently demotivating them? 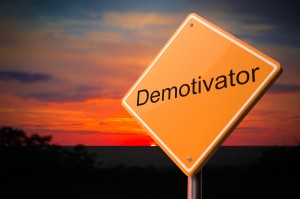 A while ago, I wrote a blog post titled How to lower productivity and demotivate your workforce that illustrated how process bottlenecks stopped employees from being productive and motivated. And sometimes, managers deliberately and consciously take actions that while logical, inadvertently create situations that are non-productive and demotivating. In fact, I wrote a column about just this topic in The Globe & Mail last November titled Why do smart managers do stupid things? Today’s blog post takes this quandary further. Today’s topic is about when things that are intended to motivate people not only turn out to be hugely demotivating, but also actually incent people to act in the absolute opposite way than was meant. As leaders charged with inspiring and encouraging staff, it’s important to consider whether our good intentions may in fact be producing an unexpected negative result. Let me share some interesting (and unusual) examples of incentives that, while good-intentioned, were hugely demotivating.

To start, let’s go back in history to 1787 when the English government instituted an incentive-paid program to transport prisoners to Australia. Ship captains were paid on the basis of the number of prisoners they loaded on to their boats in the UK, and not on the number that arrived, alive and healthy, in Australia. Not surprisingly, overcrowded unsanitary conditions were rampant on board the vessels, and if the prisoners managed to survive the voyage, they still arrived beaten, starved and sick. Church and public outcry caused the government to change its incentive program to reward the captains based on the delivery of alive and healthy men at their destination. Almost immediately, in 1793 which was the first year under the new compensation scheme, the survival rate climbed from 33% to 99%!

Let’s come to a more current example, still widely used in many organizations today. I speak about the “Perfect Attendance Award”. Talk about motivating the wrong behaviours. Essentially, this encourages employees to come to work sick, which not only increases the possibility of infecting others, but also perhaps more importantly, means that you have employees at work who are not fully focused nor performing at their best. In some jobs, operating below par could have serious and possibly fatal consequences.

A more global example of incentives producing behaviour that is completely contrary to what was intended is the Roll Back Malaria initiative, launched in 1998 with the goal of halving worldwide (primarily African) malaria deaths by 2010, and halving it again by 2015. To put the disease into context, malaria kills at least half a million Africans every year! As part of this program, governments and non-governmental organizations distribute insecticide-treated mosquito nets for use over beds. These nets are widely considered to be one of the cheapest and most effective ways to stop this disease. But ironically, the poor villagers receiving these nets, many facing starvation, have discovered that these strong high-quality mosquito nets also make great fishing nets. So instead of using them to protect their families while they sleep, they’re using the nets to fish for food. It’s not a hard decision – immediate death by starvation or later death by a disease that has not yet afflicted them.

Three examples, each one quite different, but similar in that each has resulted in behaviour that was completely opposite to what was intended. As leaders, our responsibility is to inspire and motivate employees, but if we don’t thoughtfully evaluate what we are saying and doing, we may in fact end up demotivating the same employees that we were trying to motivate!

So … what examples do you have to share? Have you observed situations where well-intentioned actions taken by managers have actually produced the opposite intended result? What advice could you offer other leaders to ensure that no one falls into this trap? Please add your Comments below.